5 platform to build an app 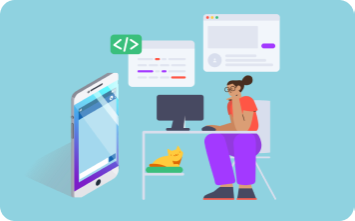 If you are wondering whether you should take the native or hybrid route for your next mobile application, you’ll find this article extremely useful.

You’ll learn the pros and cons of both approaches and which one almost always lead to a better customer experience for your users.

We always take into consideration the factors discussed here when developing a new mobile application, and now you can too.

Customer Experience Can Make or Break the Success of Your App

Before we dive into the nitty gritty world of Hybrid vs Native Mobile Apps, there’s one aspect of mobile that you should be aware of: mobile phones are very personal devices.

Have you ever lost your phone and said to yourself, “Oh well, I’ll find it another time. It’s just not that important.”?

Surely not. Once you lose your phone, your biggest priority at that moment is to find it or get a replacement. All other priorities go out the window.

Your mobile device is with you, quite literally, every minute of the day. And if the device is with you constantly, it needs to be responsive and reliable, giving you the answers you need as soon as possible. These are the expectations of all mobile users.

Nobody has time for bad user experiences, your customers and employees included.

As you read this document, understand that user experience trumps everything else when it comes to mobile.

It’s a known fact that hybrid apps don’t perform as well as native apps, so if you’re going to choose a hybrid, make sure you’re aware that your users’ experiences will likely suffer.

While there are a lot of advantages to using hybrid, customer experience for mobile should be a primary consideration.

A native app is a smartphone application developed specifically for a mobile operating system (think Objective-C or Swift for iOS vs. kotlin for Android).

Since the app is developed within a mature ecosystem following the technical and user experience guidelines of the OS, it not only has the advantage of faster performance but also “feels right”.

What feeling right means is that the in-app interaction has a look and feel consistent with most of the other native apps on the device. The end user is thus more likely to learn how to navigate and use the app faster.

Finally, native applications have the significant advantage of being able to easily access and utilize the built-in capabilities of the user’s device (e.g., GPS, address book, camera, etcetera).

When a user sends text messages, takes pictures using the device’s default app, set reminders, or uses the device’s music app (the one that came with the phone), they’re using native apps.

In short, native apps are exactly that, native to the user’s OS and hence built per those guidelines.

Hybrid applications are, at core, websites packaged into a native wrapper.

They look and feel like a native app, but ultimately outside of the basic frame of the application (typically restricted to the controls/navigational elements) they are fueled by a company’s website.

Basically, a hybrid app is a web app built using HTML5 and JavaScript, wrapped in a native container which loads most of the information on the page as the user navigates through the application (Native apps instead download most of the content when the user first installs the app).

Typically, when a company decides to build a mobile app, they are either playing catch up with their competitors, or have identified a business opportunity previously untapped.

Whatever the reason, executives want the application built out and released ASAP.

However, as most people know, ASAP often means many compromises need to be made as well as well making decisions on the fly. Both hybrid and native approaches can get the job done but there are certain considerations that should be understood right off the bat.

First, if a company can wait six months or more before the app is launched, a native approach makes the most sense. Native applications have the best performance, highest security, and best user experience.

However, if the desired time to market is less than six months, then hybrid could be a better alternative because the app can be built in one source code, can be released across platforms, and development time and effort is considerably less as compared to that of native applications.

Again, another word of caution:

Your users will EXPECT a great experience. They do not care what approach your team decided to take. They will open the app and EXPECT it to be intuitive and responsive in terms of speed.

Getting out the door may guarantee a mobile presence but it certainly doesn’t guarantee the success of the mobile app in question. As mobile app usage has taken over traditional browsing paths (desktop/laptop), companies with a mobile presence must constantly think about the two key promoters or detractors of their application: speed and user experience.

Overall, the performance of the app as well as the user experience vary significantly based on the development framework chosen, with the native app approach being the uncontested winner in both cases.

Each approach has its pros and cons but at the end of the day a native approach will have the biggest benefits for a company’s bottom line.

There are clear and distinct advantages and disadvantages for both hybrid and native approaches, and that is why this discussion is still relevant.

However, in the long run, the biggest detraction of hybrid apps is that a company will likely spend more time fixing and tweaking the app because of user complaints about UI elements or performance driven issues.

Additionally, native apps have the added advantage of functions that are specific to the OS on which the app is built (e.g., camera, GPS, address book, etcetera). Furthermore, a native approach offers the best in class security for a mobile application, the best performance, a highly responsive user interface, and access to all native APIs.

In other words, the original investment may be higher but a company will save time and money in the long run while offering a great user experience and an industry standard app performance.